For many people this little DIY lens experiment looks nothing more than a different take on a bellows lens. In a sense, they are correct. The basic concept behind this contraption is firmly rooted in the tradition of a large-format bellows camera — a lens connected by a bellows to an imaging unit that allows one to tilt, shift, and swing the optic to properly align the image plane with the “film” plane. Dry, technical, perfect and to me, boring (as you might have guessed, I’m not big on Ansel Adams, either).

I started building lenses a while ago as a way to create an optical effect, namely selective focus based on tilt-shift, break away from tradition, and loosen my dependency on technology. You see, there are a plethora of digital editing techniques to artificially create the selective focus, but there’s something special about capturing the moment — rather than synthesizing one — that excites me. I can make what I want in Photoshop, but where’s the fun in that? I can also capture a perfect image, but how about creating something through imperfection?

In the case of a bellows lens, it is engineered to recreate reality with absolute perfection. Perfection can be boring, so the fun part comes not in making straight lines as one does in traditional tilt-shift photography, but in distorting and manipulating the way one sees the world through the lens. In other words, take something expected and twist it into the unexpected.

Early on, I experimented with a number of designs, used different optics, and tried a variety of bellows materials to learn how to create a better lens. Each iteration led to further refinement and a palette of new techniques. Somewhere along the way, the idea of the Snuffleupagus was born and what started as an engineering project turned into something very different.

It was late 2008 when I approached my father with the concept for this lens. I am definitely not a machinist, but my dad can build almost anything (he built his own street-legal car out of a pile of scrap in the middle of the garage, and has been creating the perfect garden tractor for over 30 years). We talked through options, exchanged ideas, and moved the project closer to reality a step at a time.

Eventually we reached a point where it was time to build, so we scoured my hometown for parts and located a bellows at a motorcycle shop (a new “old stock” Honda motorcycle shock tower boot). I provided the Wollensak 135mm enlarger lens for the optic and an M42 to Nikon F lens adaptor as a mount. We spent time in the garage and around the kitchen table — chatting, experimenting, and discussing. I returned to Chicago after my vacation and he worked on the design — milling the aircraft aluminum and hand-building all of the parts.

In August 2009, Dad presented me with the Honda/Wollensak lens. At that moment, all of the engineering, optics and design melted away. The Snuffleupagus became much more than a lens; it morphed into a piece of engineered art envisioned by me but turned into reality by my father in ways I could have never imagined. It touched my heart and gave me pause —

A piece of milled aluminum and recycled parts captures everything I remember growing up as a child and cherish to this day in my relationship with my father. 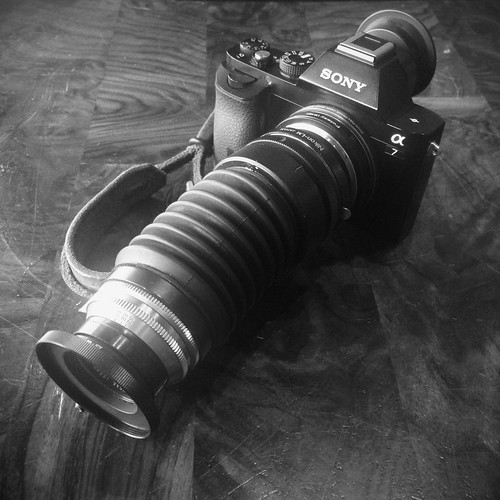